Have you read what you are about to sign?

Tuesday, 19 March 2019 – It was a beautiful evening. Priests and religious, students and parishioners, friends and family made their way to the Divine Physician and St. Luke Catholic Chaplaincy 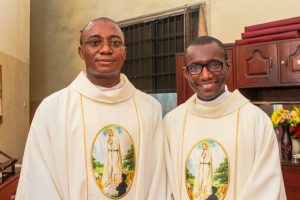 (LUTH) Idi-Araba, Lagos to witness the profession of final vows of Chikere Ugwuanyi, SJ and Peter Chidolue, SJ. There were lots of laughter, warm embraces and “happy to see you again.” The celebration began with a solemn procession of the vow men and several concelebrating priests. The provincial, Fr. Chuks Afiawari, SJ was the principal celebrant. “Priestly People, Kingly People, Holy People, God’s Chosen People” echoed from the choir stand as the congregation glowed in joy and reverence for the solemnity of the moment.

In his homily, Fr. Timothy Baghrmwin, SJ told a story of someone he knew so well. Many years ago, he said, the government of Ghana decided to retrench some staff of the cocoa market board. The government felt that there were so many redundant workers and had embarked on the exercise to 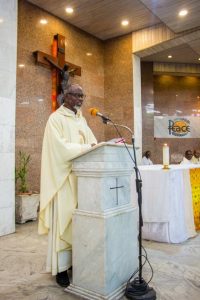 reduce their number. The exercise was to affect those at the local, district and regional offices. There was this man, who at the time was a regional boss of one of the ten regions received a letter and instructions on how to implement the policy. He was a kind man and could not bring himself to sack his staff.  So, he asked his deputy to take over the exercise and come up with the list of those to sack. The deputy joyfully accepted the responsibility. At the end of the exercise, his deputy presented a list of over 200 people to him. He did not look at the list to scrutinize it before signing. He signed and wrote the cover letter and forwarded it to the national office.

A couple of months later, He received his retrenchment letter. He had been sacked from his job. He was shocked and decided to follow up at the national head office. There, they showed him his name among those who voluntarily and involuntarily agreed to be retrenched. His deputy had put his name there without his knowledge 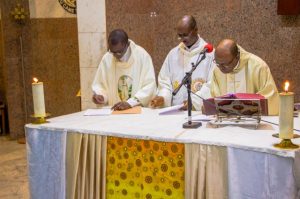 . The congregation burst out in laughter. Fr. Tim then asked Fr’s Chikere and Peter, if they have read the documents that they were about to sign? “You might be signing your death warrant,” he joked. “But as Jesuits, I trust you have read them thoroughly and have agreed with deep conviction that this is what you want.”

Fr. Tim reminded the vow men that the final vows prepare them for more missions in the Society of Jesus. He shared his experiences as a missionary in Liberia during the Ebola outbreak emphasizing that missions can be challenging. He told Chikere and Chidolue that they were about to “enter a special relationship with the church” by taking the fourth vow which prepares them for the broader mission of the church.

Given that it was the solemnity of St. Joseph, Fr., Tim could not conclude his homily without saying something about the foster father of Jesus. Fr. Tim described Joseph as a good man, a man of silence and a good listener. Joseph was also a dreamer. Joseph listened to God because he was a man of 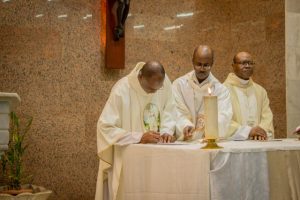 silence. Fr. Tim encouraged the congregation to emulate the life of St. Joseph. Scripture tells us that Joseph was a righteous and upright man.

Fr. Tim concluded by saying that “the love of God was the basis for Joseph’s righteousness and uprightness. Nobody, however, ca 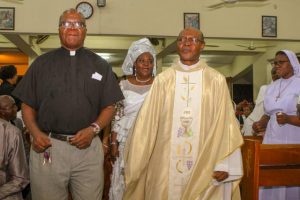 After the communion rites, Frs. Chidolue and Chikere, respectively, pronounced their final vows. The congregation danced in thanksgiving to God.

On Monday 18th March, Br. Osaretin Jonah, SJ turned 70, and the province celebrated his birthday alongside the vow men. The congregation led by the choir sang a birthday song for OT and accompanied him to the altar in a thanksgiving procession. There was a short reception after the mass and more photographs with the vow men and brother OT.