The Tale of an Eloquent Jesuit Peasant

Wednesday of the fourth week of Lent, 2019. It was the third day of the month of April. You could hardly tell that it was Lenten season in the Chapel of the Holy Name at Arrupe Jesuit University. It was a regular Wednesday community Mass for the Jesuits, but there was something in the air. There were more cars than usual in the parking lot beside and behind the school hall. A cord struck. 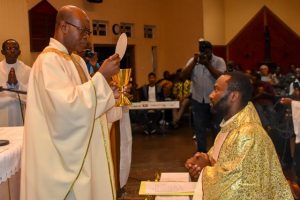 From afar, I could see golden letters arranged as W – E – L – C – O – M – E smiling at me from the entrance of the chapel. The style and dexterity of the letters were too familiar. They were at once arty and assuring.

As I got closer to the chapel, the pillars which usually posted at the main door were not bare today. Both of them were decorated with what I figured were names of somebody. The one on the left had E-V-A- R- I-S-T-U-S. The pillar on the right had E-K-W-U-E-M-E. All sixteen letters had different, accentuating colors. As I took a place in the middle of the cramped chapel, I could not help but admire the fascinating masterpiece on the sanctuary. Mr. Alex Akalefu, SJ had beautifully decorated the area around the crucifix with a depiction of a chalice and a host, and a man kneeling before another attractively, bald man. The drawing posed in the middle of the inscription – “Lord, Receive this Holocaust in an Odour of Sweetness.”

The Master of Ceremony thrilled the congregation with humor and insight. He brought light to our eyes and fire to our hearts. He explained the difference between probation and formation, between Jesuits and professed Jesuits.
Did the chapel not overflow with people?
Friends, colleagues, families and companions?
Did the vovendus not process in, clad in a golden chasuble?
Accompanied by his teachers, peers, friends and some who played different roles in his formation?
A man whom the Master of Ceremony, Mr. Charles Ugwuonah, SJ, introduced as one who needs no introduction in the Arrupe Community, whose presence inspires joy in the hearts of many in the community, began the Mass. They called him the Provincial Superior – Fr. Chuks Afiawari, SJ.

Although the Arrupe Community had a reputation for animating beautiful liturgical celebrations, today’s Mass had more to it. The choir sang with fresh inspiration, the congregation participated with joyful acclamation and ululation, and the homilist, Fr. Gilbert Mardai, SJ, broke the word with heavenly eloquence and meticulousness. Throughout the ceremony, the atmosphere throbbed with excitement. At the moment of the pronouncement of the vows, the atmosphere pulsated, in the words of the provincial, at the “birth of a new Jesuit”. Each one listened intently as the vovendus committed himself into eternal union with God through the Society of Jesus.

The preacher told a story of Shaka Zulu and shiny objects, of Eva’s secrets and history.
A love story where the Society tried its lover for virtue, tested him for dedication, judged him for competence, verified him for commitment, and evaluated him for suitability.
Did we not watch the lover fulfill the promise he made to his Heartthrob 24 years ago; a romantic expedition punctuated by difficulties and trials, vicissitudes and denials, joy and pain, fulfillment and disdain?
On knees hardened by the rigors of the journey, and eyes fixed on the broken body and bleeding heart of his Beloved, he enunciated every word of the vows he wrote in his own handwriting, with an undivided heart, with every beat vibrating with thanksgiving.

The Arrupe Community is famous for the enthusiasm that characterize their thanksgiving. Today, the heat was turned on. The singer, Mr. Anthony Otah Kalu, SJ, thrilled the congregation to the Nigerian – choruses – styled thanksgiving. The chapel, for a quarter of an hour, became a typical Sunday Mass in the heart of Nigeria. Jesuits, friends, collaborators, and families joined the dancing, as Evaristus led the mania with articulate steps inspired by the zest of his rebirth into the Society of Jesus.

Perhaps the most emotionally-charged moment of the celebration was when the newborn Jesuit expressed gratitude to all and sundry for their support to him all through the journey. Special attention was given to Frs. Stephen Buckland SJ and Kizito Kiyimba SJ, both of whom were his teachers at the then Arrupe College. Such a rare occurrence to have one’s peers and teachers present at one’s final incorporation ceremony.

We paid homage to Evaristus’ immediate family members who traveled from Nigeria to grace the occasion: his mother Mrs. Bernadette Ekwueme, his elder brother Mr. Joseph Ekwueme, and his nephew, Mr. Michael Ozide.
His mother beamed with smiles and pride. She watched her son who has now become her father commit himself to perpetual religious peasantry through poverty, guided obedience, and loving chastity.
Did his brother not feel honored by the warmth of the community, and his nephew admire the courage of his uncle to grow in fidelity?
Did we not watch the father extol his mother with praises, showering her with blessings, dramatically embracing her, and appreciating her support through the 24 years of graces?

The dinner that followed saw more celebration. A round of testimonies and presentation of gifts punctuated the eating, drinking, and conversations. As Sister Evening drew the curtains on the event, the crowd thinned, and the owners of the house remained. With unrehearsed coordination, the members of the ANW province present circled the newborn eloquent Jesuit peasant and broke into a wave of traditional dancing. Osita Osadebe’s Ebezina oiled stiff bones, bent straight hips, and wobbled straight legs. Each member present had an opportunity to showcase what they considered as dancing skills. Of course, nobody beat the newborn Jesuit. His joy was the fullest; his legs were the fastest, and his smiles, the broadest!
Music became the voice that told the tale of the eloquent Jesuit peasant.
He swayed to the left, and he flowed to the right. His feet light as a feather, his arms were flying as they can cut through leather. His joy overflowing as the labors of his peasantry has yielded golden sheaves. His eyes were sparkling with excitement, his voice ringing gratitude across Mount Pleasant.
Did we not see joy take root in his life? Did we not watch him make the dedication to his wife? Did the tale of the eloquent peasant not inspire younger peasants around, teaching us to embrace peasantry with the Jesuits; writing our own love stories, and striving to fulfill the promise to enter that same Society, vowing perpetual poverty, obedience, and chastity?