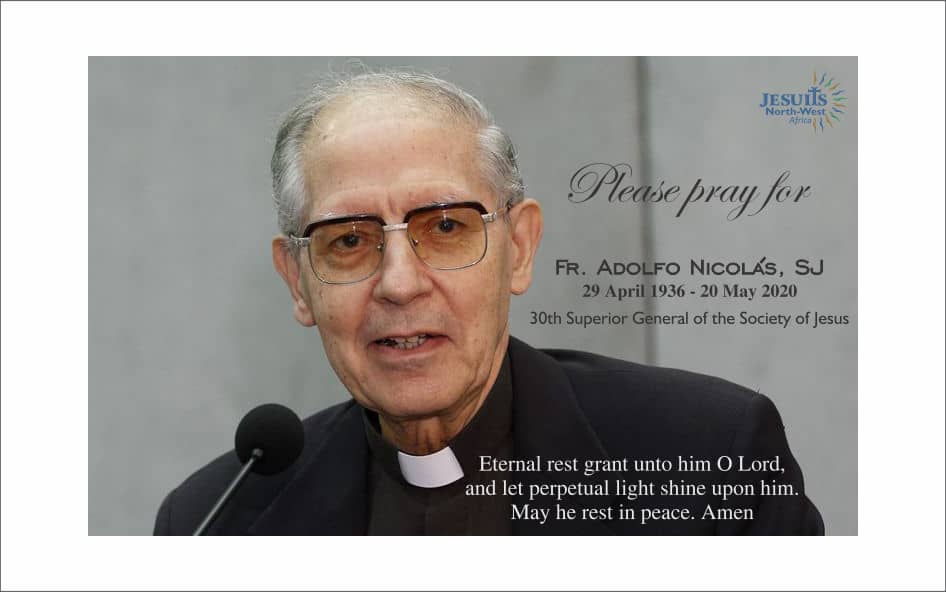 “A man of grace and wisdom, simple, unpretentious, dedicated”

May 20, 2020 – The Jesuit General Curia in Rome today announced that former Superior General, Fr. Adolfo Nicolás died, today, in Tokyo, Japan. He was a member of the Jesuit community of Loyola House in Kamishakujii, and had been ill for a number of years. He is deeply mourned by the Jesuits of Japan and Asia Pacific, his family and compatriots in Spain, and his many friends around the world.

“I offer my sincere condolences to the Jesuit province of Japan, to Fr. Nicolas’ family, to the Jesuits in Spain and the Philippines and to his many friends all around the world.” said Fr. Arturo Sosa, current Superior General. “Fr. Nicolás gave of himself throughout his life. It was a life marked by intense service, calm availability and a deep ability to inculturate in Japan, where he went as a young Jesuit. It was a culture he loved dearly and to which he committed himself. His time as General was marked by his sense of humour, his courage, his humility and his close relationship with Pope Francis. All of us here at the Jesuit General Curia mourn him and a special Mass will be offered here in Rome as soon as we can organise it. Because of travel restrictions just now, I cannot travel to Japan for the funeral but I assure all his many friends there of my closeness, my compassion and my condolences.”

All who worked with Fr Nicolás in the General Curia have appreciated greatly his presence during his time as General. “He will be greatly mourned throughout the Society as a wise, humble and dedicated Jesuit, a man of grace and wisdom, simple, unpretentious.” said Fr Sosa.
He had a strong relationship with Pope Benedict and close and warm bonds with Pope Francis.
“The Society was founded to serve the Lord alone and the Church His spouse under the Roman Pontiff” said Fr Sosa. “Fr. Nicolás helped the Society to live in a concrete way this dimension so characteristic of our charism. It was a relationship of availability to the Holy Father which was also full of sincere affection”.
A memorial mass will be celebrated in Rome in the Church of Gesù at a date to be determined. Social distancing rules will apply. Details to follow.

A special website has been created where you can see photos and articles: https://nicolas.jesuitgeneral.org/May

Photos from the Memorial Mass in Rome. Click Here